If London is one entity, the Underground, or Tube as it is known, is its veins. The rapid transit system has its origins in the world’s first underground passenger railway, which opened in 1863, and today boasts 11 lines, 270 stations, and over 1.3 billion passengers a year, making it the 12th busiest metro system in the world.

It’s easy to overlook some of the stranger and more interesting details as we rush about our daily lives here in the city, but every station has a story, or some hidden secret that’s easily ignored by the passing commuters. We’ve gathered some of our favourites here!

A Galaxy Far, Far Away in Canary Wharf

The Underground is constantly evolving, and Canary Wharf station showcases how the network has embraced modern designs perfectly. During the Second World War, London’s Docklands, previously home to a huge amount of industry, had been almost completely destroyed by bombing campaigns. As part of efforts to redevelop the area, the Docklands Light Railway was created to provide more public transport services, but within a few years it became apparent that more capacity would be needed. So the Jubilee Line was planned, with a huge new station serving Canary Wharf.

The station was opened in 1999, and designed by Sir Norman Foster (who was also the mind behind the Millennium Bridge and Wembley Stadium) to evoke a cathedral interior. While two glass domed roofs are all that you can see of the station above ground, below the pavement the station goes to a depth of 24 metres (78 feet) and is 265 metres (869 feet) long. The mammoth proportions allow ample room for the more than 40 million passengers who pass through every year.

While the station itself is worth a look for anyone who holds stunning architecture near and dear to their hearts, we’ve kicked off our list of Underground oddities with Canary Wharf because of the allure it holds to science fiction fans.

In 2016, a trailer for the new Star Wars standalone film Rogue One was released, and fans of both the franchise and the London station were quick to notice a familiar sight – the futuristic looking platforms, with sliding transparent doors made a fleeting appearance as Jyn Erso (Felicity Jones) and her band of renegades fought the dreaded Galactic Empire. When the film was released later that year, it became apparent that the station had indeed been given a role in the film – as the inside of an infamous Empire base.

But don’t worry, if you ever fear going too far to the Dark Side at Canary Wharf, you can always count yourself lucky that you’re not living out one of the other film appearances the station has had – in the iconic zombie horror film 28 Days Later.

If you want to discover more starring roles that London has taken on the silver screen, take a look at our London Film & TV Highlights tour, and we will give you the red carpet treatment.

The Station of Suspense

Lots of Underground stations contain nods to the heritage of an area, but Leytonstone really goes the extra mile! Sir Alfred Hitchcock, the acclaimed director who gave us classics such as Psycho, Strangers on a Train, Rear Window, and many, many more and who became known as ‘the Master of Suspense’, was born in the area in 1899. 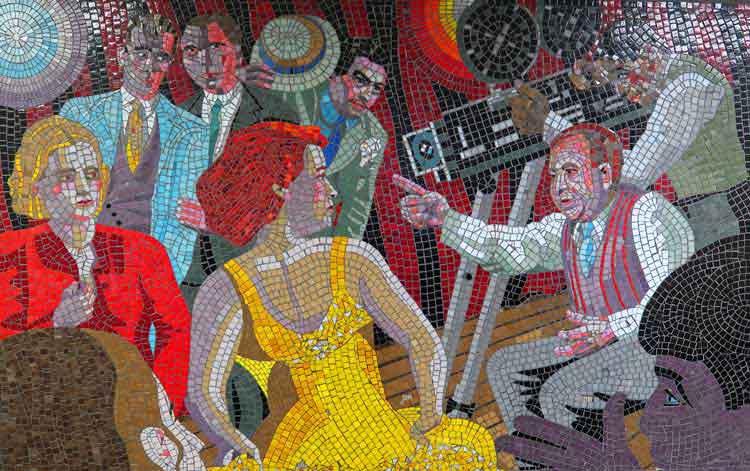 To celebrate the centenary of his birth, the London Borough of Waltham Forest (in which the station lies) commissioned the Greenwich Mural Workshop to create mosaics representing Hitchcock’s life and films within the station itself. 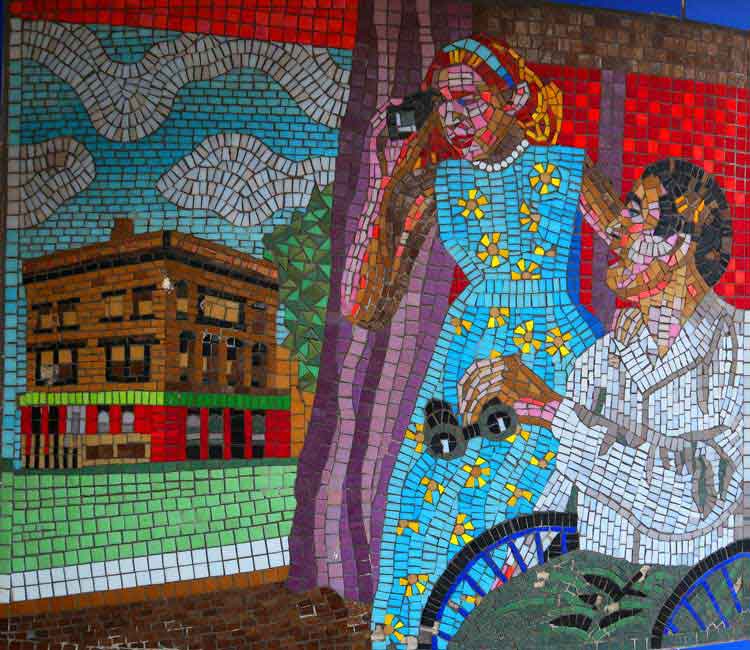 The mosaics were started in June 2000, and the completed works were unveiled in May 2001. In total they comprise more than 80,000 tiny coloured tiles. Getting a chance to enjoy them in the peace and quiet of an art gallery may prove a challenge however – the corridor in the station the mosaics are placed in is usually very busy. 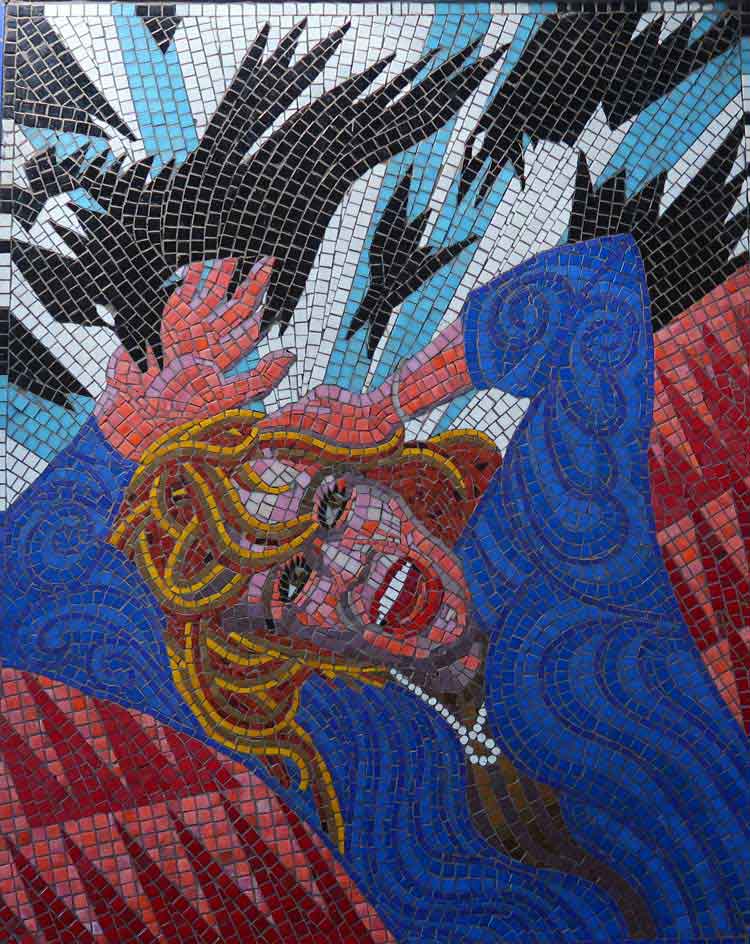 But if you head to the station at quieter times, you’ll be able to enjoy representations of films such as Vertigo, The Birds, and To Catch a Thief, all rendered in colourful and vividly detailed mosaic form – definitely worth dealing with a few disgruntled commuters who would prefer you not stand in the way of them!

A particular highlight is the mosaic based on North By Northwest – it’s based on the iconic scene of Cary Grant being chased through a field by a crop-dusting aeroplane, and brilliantly captures the intense dynamism and thrills that Hitchcock had perfected in his films.

While our first two selections were focused on film and Underground stations, let’s take a look at some of the more unusual features around the city’s tube network. If you want to see an oddity that even most local Londoners don’t know exist, head to Canning Town station.

Canning Town station is evidence of a changing city. With the boom to the east of London of a new financial hub at Canary Wharf, it was decided to upgrade the local transit facilities to match this development in the 1980s after proposals for such a plan first emerged a decade earlier. The Docklands Light Railway (DLR) system wasn’t up to the task of handling all the commuters heading towards the Isle of Dogs, so it was decided to extend the Jubilee Line east to help make room for more people.

The extension was finally fully complete in 1999, and as the delayed opening might suggest, was not without a few hiccups along the way during the six years it took to finish. For example, the scaffolding that has surrounded the iconic Big Ben (more formally known as the Elizabeth Tower) is in part to correct a tilt caused by deep excavations for the extension underneath Westminster Station!

But ingenuity won out, and that’s what we’re celebrating at Canning Town Station. The station is an interchange, with commuters switching between the Jubilee Line and the DLR, so easy access between the two was vital. A unique design was created – the platforms for the different lines would sit directly atop one another, visible from street level, giving the station a unique ‘tiered’ layout. You can see this in the picture below, the DLR train above and a Jubilee Line train below. 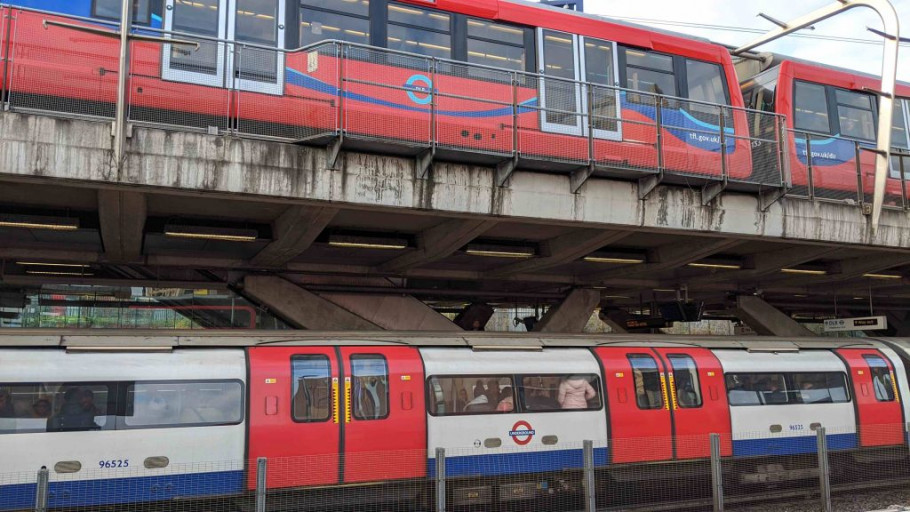 The extension has been a huge success, seeing the rapid development of eastern London to match the boom of jobs provided by the new financial hub around the Isle of Dogs. In part, this is due to clever design and ‘future proofing’ of stations for increasing use, including bigger spaces, sliding doors to prevent overcrowding, and easy interchanges like the Canning Town station tier design.

The station even pays tribute to the history of industry that laid the foundations for its development, with Richard Kinderseley commissioned to memorialise the Thames Ironworks that stood at that location through a series of engravings.

The Game is Afoot at Baker Street

Baker Street station has a fantastic history. It was one of the original stations on the old Metropolitan Railway, which was the start of the Tube as we know it, opening in 1863 as the world’s first underground railway. Trains ran every 20 minutes, and it was an extraordinary success, with extensions rapidly planned and constructed.

The station today is sprawling, taking in three different stations for the different lines that run through it, but you can find the best preserved look at what the station was like in 1863 on Circle and District Line platforms five and six. You will still be able to see the old crest of the Metropolitan Railway (now supplanted by the much more familiar London Underground roundel!), as well as old photographs and planning documents from the early days of Baker Street station – you will be amazed at how little it has changed.

In the 1980s, when refurbishments were being made to the station, it was decided to add in a little unique twist of local culture. It has, of course, been well documented that Sherlock Holmes, the world’s greatest detective, resides at 221B Baker Street (and you can learn all about him and his creator, Arthur Conan Doyle, on our London Literature Highlights tour). If you head to the Jubilee Line platforms, you will find depictions of some of Sherlock Holmes’ most famous cases, from the Hound of the Baskervilles to the Sign of the Four. Not only that, but you will also find more subtle reference to the legendary crime solver – his silhouette, bearing his famous deerstalker hat and smoking his iconic pipe, on the tiles adorning the corridors in the station.

No entry about the London Underground’s strangest features would be complete without talking about the near-legendary ‘ghost stations’ scattered around the well-known web of tube lines we know today. Perhaps the best of them all lies beneath the streets around Aldwych, next to Somerset House.

Aldwych was originally called Strand Tube Station, after the main road leading towards Charing Cross and Trafalgar Square that it sits at the top of, and it opened in 1907. While it was renamed Aldwych Station in 1915, it was never particularly useful, due to development of stations around Covent Garden linking the lines it was supposed to connect. Despite this, the station was in operation until 1994, when the cost of replacing the lifts finally rang the death knell for the station – and its existence was never short of excitement.

During the Blitz in the Second World War, a decision was made to move treasures from the British Museum into the tunnels far below London’s streets for safekeeping, and Aldwych station was chosen due to its proximity to Bloomsbury and the museum itself. These included the famous Parthenon Marbles, taken from the Acropolis in Athens by Lord Elgin in the first decade of the 19th Century, and still the subject of a fierce debate over ownership. Meanwhile other parts of the station were turned into bomb shelters for the civilian population of the area. 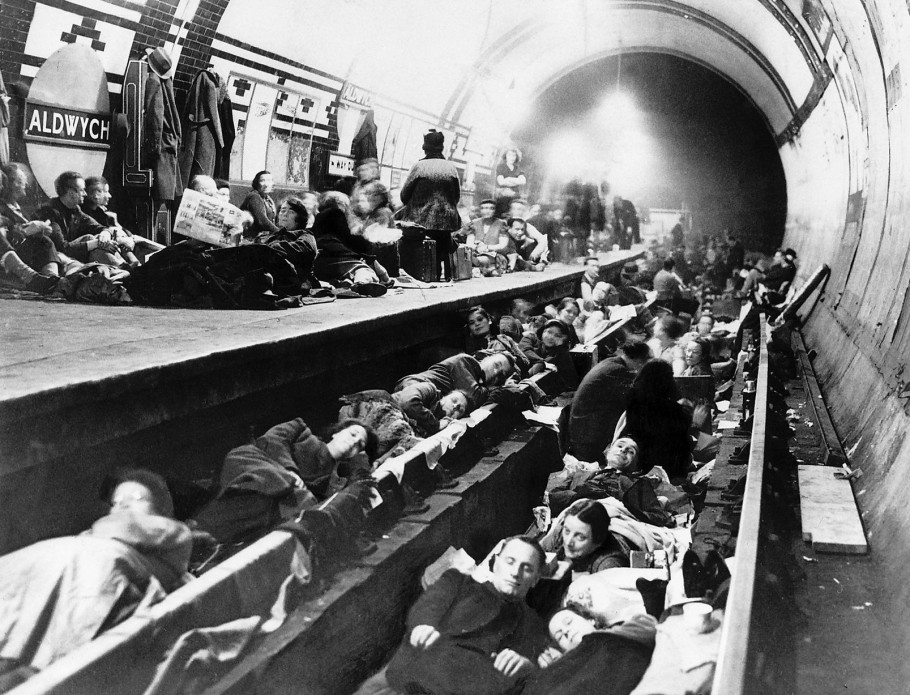 Though the station lies empty now, with only its facade visible at street level, the platforms are not entirely empty. Deep beneath the street level entrance to the station sits a 1972 stock London Underground train – the remnants of the many films and television shows that have been captured in the abandoned depths of Aldwych Station, such as Darkest Hour, Sherlock, Atonement, Fast and Furious 6, and V for Vendetta (as depicted in the frame below from the film).