The nation is abuzz with chants declaring that ‘football’s coming home’, and all eyes are turned to Wembley Stadium for the Euro 2020 final between England and Italy on Sunday evening. With the chance for the England men’s football team to claim a first major trophy in over half a century, the atmosphere will be electric – but what’s the story of the stadium where the match will be played? The national stadium has been intertwined with the fortunes of English football for generations, so let’s take a trip down memory lane (or Wembley Way), and discover the story of this London landmark!

Of course, should you want to experience the incredibly buzz of a major sporting event here in the UK, simply get in touch with us – whether it’s sumptuous hospitality or an authentic matchday experience, we would be delighted to advise you on how to get a piece of all the best sporting action during your visit.

A Century Of History

England is full of iconic football stadiums, from Old Trafford or Anfield in the north, to Stamford Bridge or White Hart Lane in London. Unlike those legendary venues, however, Wembley  Stadium was never built to be the home of an individual club (though it  has  hosted  some  on  short-term arrangements); instead, it’s best known as the home of the England national football team.

Wembley Stadium was first opened on the 28th of April,  1923, and was originally known as the British Empire Exhibition Stadium, since the site was built for the 1924/1925 British Empire Exhibition in the area. It was conceived by the Prince of  Wales at the time  to be ‘a great national sports ground’. In  the Official Guide to the Exhibition, it was claimed that ‘there is not in all England a modern building that can compete  with the Empire Stadium in the effect it creates upon the mind of the spectator’.

It was constructed in 300 days at a cost of £750,000, and upon completion the iconic ‘Twin Towers’ of Wembley first appeared on the London skyline. Though the initial focus was not football, key figures in the game’s governance played a role in lobbying for the site to be chosen – the site had been the venue of football matches for decades – and it was the appeal of the site as a football stadium that saved it from demolition after the Exhibition concluded.

The first event held at the ground was the 1923 FA Cup final between Bolton Wanderers and West Ham Utd, just a few days after Wembley Stadium was completed. The FA Cup is the major domestic knockout tournament for English club football teams, and Wembley Stadium was the perfect impartial venue for such a showpiece.

A crowd of over 300,000 flocked to the stadium, with another 60,000 waiting outside. The crowds were so great that they started to move onto the pitch, preventing the game from being started. Police Constable George Scorey, mounted upon his white horse Billy, pushed the masses back in a now-iconic  feat  of  leadership.  The  images  of  Scorey  clearing  the  crowds  became  synonymous  with  ‘English spirit’ and ‘the magic of Wembley’, while the event itself became known as ‘The White Horse Final’.

PC Scorey was given free tickets to every subsequent FA Cup final as a thank you from the sport’s governing body – unfortunately, despite having an incredibly appropriate name for the situation, had absolutely no personal interest in the game whatsoever, and so declined the offers and never attended. Despite this inauspicious start, the stadium would go on to host the FA Cup final, one of English football’s biggest matches, every season from that point for the next 78 years, barring a few exceptions.

After  the  Exhibition  concluded,  Jimmy  White  bought  the  site  for  £300,000,  and  subsequently sold the stadium to Arthur Elvin for £122,500 in 1927. By the time the 1940s  arrived, Wembley Stadium (as it was now officially known) had a capacity of 100,000, with  45,000 of those spectators having seated accommodation. The  stadium,  now  benefiting  from  an  investment  in  higher  quality  concrete  terracing,  was  integral to London’s hosting of the 1948 Olympics, and was one of the principal venues of the Games, as shown in the photo below of the USA team at the Opening Ceremony at Wembley. 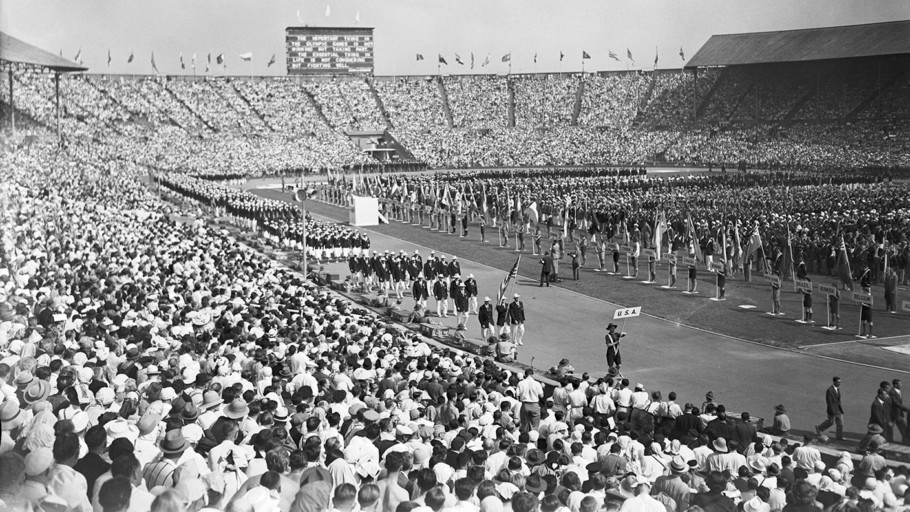 Over the next half century, Wembley Stadium played host to a range of iconic  events, such as the 1966 FIFA World Cup final, which saw England triumph over West Germany. After this momentous occasion, Wembley became known as ‘hallowed turf’,  a phrase that, while subsequently used around the world at other stadia, was first used to describe Wembley Stadium. Ever since Bobby Moore lifted the trophy after climbing the famous 39 steps to the Royal Box to meet the Queen, Wembley has been known as  the site of England’s proudest footballing moment, and the memory of the stadium on that day burns bright in the minds of all who support the national team. To this day, it remains the most watched television event in UK history.

Other events were from different sectors, such as the 1985 Live Aid Concert, famous for its set by Freddie Mercury and Queen that’s depicted in the photograph below, but all served to  cement Wembley Stadium as an iconic piece of English entertainment heritage, furthering the legend and legacy of the site. 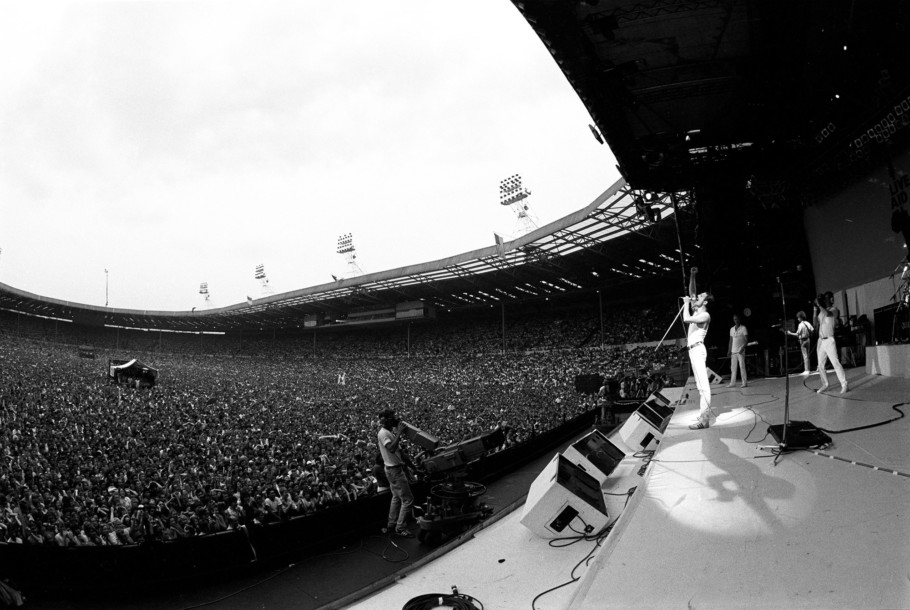 By the 1990s, however, it was increasingly obvious that the old Wembley Stadium was no  longer fit for purpose. The old ground could simply not keep up with the requirements of a  new  generation  of  supporters.  It  was  therefore  decided  in  1996  that Wembley  would  be  redeveloped  on  its  current  site;  this  was  despite  competing  bids  from  Birmingham,  Manchester, Bradford, and Sheffield to house a new national stadium.

A New Landmark For Football And For London

When the  announcement came in 1998 that the famous Twin Towers of Wembley, a defining part of the site since  1923, would be demolished and would not be a part of the new stadium design, there was  outrage. English Heritage launched a campaign to save the towers, and national media was in  uproar, with  both  the  Sun and  the Daily  Star  newspapers  running  campaigns  to ‘save  the  towers’.

They were supported by Brent London Borough Council, who drew  a line in the sand that refused to grant permission for any Wembley Stadium plans that did  not include the Towers, calling them ‘iconic’. The  delays  around  gaining  the  planning  permissions and community support meant that the old Wembley Stadium, despite seeing its last game in 2000, was not demolished until 2003.

Despite the fuss, the  eventual  designs  for  the  stadium  saw  the Grade  II  listed Twin  Towers  demolished after English Heritage withdrew their objections to the plan, and replaced with a  huge ‘triumphant arch’. The arch sits at an angle of 22° off  true, now such a well-known piece of  the London cityscape, was lifted into  place in March 2004; it is 133 metres high, weighing 1750 tonnes, and is currently the world’s  longest unsupported roof structure. At that time, the Football Association  stated  that  ‘the  arch  is  going  to  be  a  landmark  for  football  and  a  landmark  for  London’.

The stadium, upon completion, utilised a bowl design, with a capacity of 90,000. It  stands  on  a  raised  podium  that  overlooks  the  surrounding area, with fans approaching the stadium down ‘Wembley Way’, a pedestrianised  avenue that offers a vista of the stadium ahead, or ‘White Horse Bridge’, a footbridge that pays tribute to one of the defining moments of Wembley’s past. The redevelopment had been projected to cost £36  million; the final cost was closer to £1 billion. The new Wembley Stadium was completed in  2007, in  time  for  the  2007-08 FA Cup  final between  Chelsea Football Club and Manchester United, and though there have long been rumours to the contrary, the Towers really weren’t buried intact beneath the pitch.

Since then, the stadium has returned to its place as a venue for major events, hosting annual FA Cup clashes, international fixtures, concerts from global names, and even the NFL, which has held games every year at the new Wembley for 15 years now.

I Know It Was Then, But It Could Be Again

In an ironic twist of fate, one of the most dramatic moments of the original stadium came towards the end of its life – the semi-final of Euro 1996. England hosted the competition, and Wembley Stadium was the venue for all their matches, creating a natural link to the heroes of 1966, whose success had not been matched in the 30 years since. The now-famous anthem of ‘Three Lions’ was recorded, chronicling the three decades of failure that had followed England’s World Cup triumph, with the refrain of ‘football’s coming home’ referencing the fact that England was where the rules of the modern game were first codified.

Despite mounting an impressive campaign, England fell short, with a decisive penalty in the semi-final game against Germany missed by none other than Gareth Southgate – the man now leading England in their first major final since 1966, which will be, once again, hosted at Wembley Stadium.

Only time will tell if England can turn the tide of history and triumph on Sunday night. But there would certainly be a bit of poetry if the next chapter in the long and dramatic history of Wembley Stadium involves a warm welcome back home again to football after all this time…